Rewards are the prizes in Zombie Mode.

Reward Crates are obtainable in various ways, depending on the maps/modes reward mechanics. The prizes may vary in all CF versions and are subject to change at any time. Players can obtain equipments (with the corresponding bosses' theme), HypoMed-S, HypoMed-L, Revive Tokens and either temporary or permanent characters/weapons. The specific reward mechanics are noted as below.

Crates are stored in "Item" section in Item Storage. Players can choose to open each type of crates individually or all of them in one panel. Each crate is put on one separate row - clicking the Key icon beside it will open the crate.

There are 4 Point Crates that players can obtain during a Challenge Mode match: Bronze, Silver, Gold and Crystal/Red Crystal. This is the easiest type of Crate to be obtained, as players can get point by shooting at the zombie or bosses, or from Bonus Round.

During the match, players can check the scoreboard (Tab key) to see which crates they have owned and which one comes next. Once the points requirement is met, players will receive Reward crates immediately. If players finish/fail the match, they have the option to open the crates right away at the result screen, or save it for later. If players get disconnected or kicked out of the match, they can still find the Reward crates in their Item Storage.

Bronze Crates will give out one HypoMed gun along with a random item (including another HypoMed, making it possible to win 2 HypoMed in one Bronze crate), all other crates give out two HypoMed guns (Except from Death Rally crates onward, which gives out HypoMed-L).

The point requirement to obtain crates:

Starting from Thunder Tower, Point Crates are replaced with Point Safes. They are the same to Point Crates, including the color types (Bronze, Silver, Gold and Crystal).

The major difference comparing to Point Crates is that those safes contain maps-respective Point Crates along with ones from older map(s) and players can choose to open one of them - unlike the Point Crates, it's possible to open lower-ranking crates here (A Gold Safe will contain its own Gold/Silver/Bronze Crates AND older Gold/Silver/Bronze Crates). Once players pick their reward, the crates will be opened. Crystal Safe offers the option to open all crates available, including Red Crystal from Dinner Theater.

Players can obtain Boss Crates by collecting Boss Tokens (mostly 5, but 25 in Boss Arena) from defeating bosses (mostly in Normal Difficulty and above), or simply defeating the boss for once. Unlike Point Crates or Point Safes, players must complete the match in order to obtains the crates without isconnecting or getting kicked from the match.

Depending on the maps, the reward number in Boss Crates can be either two or three. Most old maps usually offer HypoMeds. Boss Crates only give out one random prize (pre-Devastated City).

Available only in Devastated City and Boss Arena (Hard Difficulty).

Starting from Crater 2, players can receive Boss Clear Rewards at the end of the match. The rewards differ between rates (SS, S+, A, B), which is implemented by the Difficulty level setting. Players have to defeat the final boss in a certain time. If not, the corresponding rewards will be reduced (from SS to S+ for example).

Instead of Point Safes to get prizes, this Tier Reward features the linear sets of reward. There are five tiers: Bronze, Silver, Gold 1, Gold 2 and Diamond. To obtain the reward, players must gain Tier Point by adapting corresponding requirement to unlock prizes. The Tier Point is limited per day, however.

This mode has the similar reward mechanics to AI Ticket, where players will earn Reward Box randomly when they shoot and kill zombies. There are 3 types of Reward Boxes: Silver, Blue and Orange. During each round, players can randomly those Reward Boxes, and after the round finished, the Reward Boxes will be opened automatically, revealing the prize players have earned. At the end of the match (Normal and Hard Difficulty), there will be some Silver Slots for players to compete - after selecting it, the prizes will be revealed. Additionally, if players have any Gold Box Token, they can choose to open one of the Gold slots beneath.

In Hard Difficulty, the Yellow Reward Boxes is added besides the 3 Reward Boxes, and it can be randomly obtained via killing Elite zombies. And at the end of the match, players will also receive Heroic Clear Reward automatically shown on the screen.

The rewards in this mode are usually Weapon/Item Fingerprints, Gold Coins, temporary or permanent weapons/characters (STAR-Camo and SWAT-Camo).

This mode reused the crate mechanic, but there are two type: Normal and Boss. It gives one or two crates after passing a round or beating a Boss (based on damage inflicted during the previous round(s) by players). There's a special Bonus Crate to award players with random prize should they succeed in the Bonus Round. The Crates given in the match are various between Difficulty Levels, however. 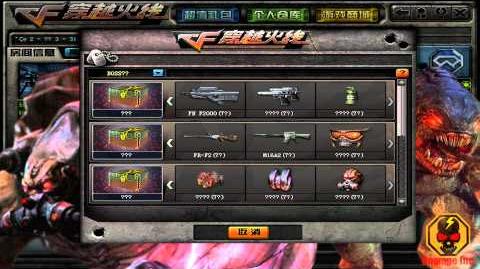