The battle between humans and mutants have been kept on for couple years, although humans' party stands to lost a lot at the beginning, but since the human survivors found a effective way to fight againt mutants, the situations went better. And the appearance of the Savior was effectually helped the soldiers to win the battle in some areas.

However, good times don't last long, the biochemical virus were mutated by the effect of the radioaction, and a entirely new variant of mutants was later borned, nobody knows what this mutant looks like and what ability it has, because the place where it goes were always with no survivors. Thus it's been given a name as the "Terminator". - CF China's description, can be seen there.

After the countdown reaches zero, a random player will be chosen to be Xeno. Unlike another Mutants, Xeno has a longer attack range, more health point, and can see soldiers through the wall. as they are indicated by a red chevron. He can use a Bulletproof Shield (G) to reduce damage taken and knockback effect to charge soldiers' defense - it's very effective against mid-powered weapons but only last for 3 seconds. 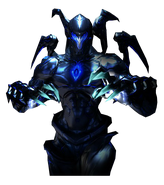 Retrieved from "https://crossfirefps.fandom.com/wiki/Xeno?oldid=192492"
Community content is available under CC-BY-SA unless otherwise noted.