This character composes three male characters from all three perspective sides. Similar to Heirs, they don't have the Furious Kick, but they use a similar attack with Martial Art - the Wild Uppercut. They have own their voice pack for all sides like any other VVIP characters.

Wild West is a cowboy-themed character with a Southern accent and cowboy attire. The Global Risk side has a blue shirt and a leather vest with a bandolier across his chest. The Black List side has a red handkerchief with a white shirt and a leather vest also donning a bandolier and ammo belt. Both GR and BL have black pants, boots, and a cowboy hat. The Special Character isn't cowboy-themed but instead has a black shirt and pants with metal armor sporting red accents, he also has black glasses, kneepads, and gloves. 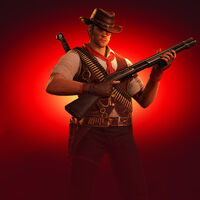