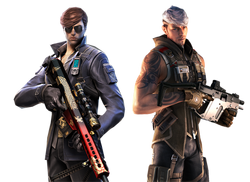 White Wolf is a male character featured in CrossFire.

This history was taken on CF Vietnam's official homepage. Other versions may be different.

The battle between Global Risk and Black List has been going on all those years and it doesn't seem to end any time soon. To ensure their stable supply of weapons and treatments, BL has been training a special team called the First Avengers a few years ago, but this section, influenced by money, split away from their founder and start their own faction, using the same name F.A given to them in the old days. They take orders from any government or independent force to transport goods around the world, and their motto is "Do Not Open The Goods" - this ensures that they won't know anything about the stuff they transport and they are not responsible for the usage of it for both parties. The First Avengers soldiers are capable of mowing down anyone on their way as long as their assignment is fulfilled, and they do not hesitate of killing people against them.

Global Risk
Add a photo to this gallery
Retrieved from "https://crossfirefps.fandom.com/wiki/White_Wolf?oldid=193533"
Community content is available under CC-BY-SA unless otherwise noted.