Start a Wiki
Weapon Upgrade System is a weapon system in CrossFire. It allows players to upgrade certain weapons to a newer form and buffs its usefulness.

Players can visit the WU shop via a menu in the Item Shop - here, they can check out all upgrade able weapons as well as their levels, and related perks that come with it. Upgrading a weapon requires material such as Upgrade Kits (for Royal Guard weapons) which can be bought from Mileage Shop, or ZM Stones (for AK47-Buster) which can be obtained by playing certain Zombie Mode maps or bought from the Trade System (not available in all server).

Each time a weapon is upgraded, it will gain additional perks such as increased ammo per magazine, more spare ammo, faster drawing/reloading speed,... In addition, the weapon will change its appearance based on the level it reaches - there are usually a total of 3 forms. Unlike with Wave Mode's class cards, upgrading is 100% success as long as players have enough materials.

M4A1-S Royal Guard Upgrade
Add a photo to this gallery 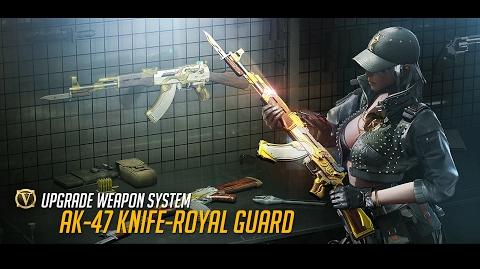