Start a Wiki
Weapon Master is another FFA add-on in CrossFire. It once again restricts weapons usage for all players, but instead of a class, players will use a set of weapons and score kill to level up and change weapons accordingly.

Up to 16 players can join a Weapon Master room. Everyone will start at level 1 and be armed with an M4A1 and a Knife as backup weapon - from here, it's up to each player to score kill and climb up in level. Each time a new level is reached, player will gain access to a new weapon and once a milestone is reached, player will change weapon class, from Rifles to SMG, Sniper Rifles, Shotguns, Pistols, Melee / Grenade, and ending with the Special Melee Weapon. The match end once a player beats level 12, or when the timer runs out. 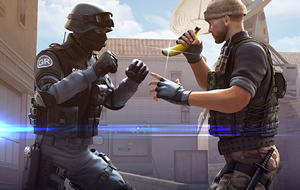 Guide.
Add a photo to this gallery

Retrieved from "https://crossfirefps.fandom.com/wiki/Weapon_Master?oldid=196999"
Community content is available under CC-BY-SA unless otherwise noted.