These are different stylized borders when you are loading into a game. They are mainly earned from reaching a certain rank in Elite PVE Mode. Others can be displayed by equipping a full VVIP Weapon Set or equipping a specific character.

Playing Ranked Match gives Effort Rank stickers, which you can put on your portrait on the loading screen. Higher Effort ranks you get, the cooler the stickers looks. Max Level is 30.

This type of Loading Screen feature displays a sticker in which you earn by completing Effort Missions. The max rank is 30 and the sticker becomes increasingly complex as you earn higher levels.

These type of borders are exclusive to VVIP Weapon Sets when equipping a full set and do not show up in-game but rather only in the Game Lobby, and the Item Storage's Bags section but not on the actual list of all your weapons.

Recently added, this allows the player to change the actual icon of what Rank you are when you reach Honor Marshall. They require getting a certain level in the Honor Level system. This displays in Game Lobbies and the Loading Screen. 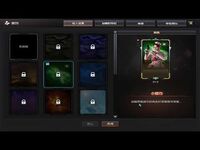