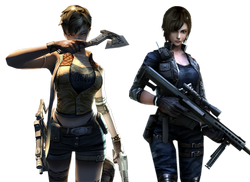 The ULP was founded by a group of lady soldiers who were refused enlistment in elite Special Forces around the world in order to prove that women can hold their own against men in the military. This unit specializes in covert and anti-terrorist operations. Using their feminine charm and lethal combat training, the ULP has become a force to reckon with. The ULP can be seen working alongside with other special forces usually for the right price.

A ULP is about to fire her Dual Desert Eagle Gold with an amusing movement in Black Widow as seen in CrossFire CGI Trailer.