Trade System is a new section in the game that introduces loot boxes that contain different items, and a marketplace for said boxes and their contents.

As users play the game, they may randomly receive a Loot Box at the end of a match. Users can only receive one loot box per week. These boxes require Keys to open them and get their content otherwise users may sell the boxes for and/or its exclusive items on the marketplace for cashpoints.

Upon acquiring a loot box, it is placed inside the player's storage. When opening the boxes, keys must first be purchased by cash (priced very cheaply). Once the box is opened the user can either use the item inside or sell it on the market. Once the item is used by the player, it cannot be sold.

Players dictate the price of all boxes and items sold on the market; usually based on their type, rarity, and if they are permanent or temporary. Take note that most items from loot boxes are VVIP Weapon Attachments. The sold items/weapons are various between servers.

There is also purchase restriction depending on the user's rank. High-rank users can trade more items all at once.

Acquiring a Loot Box after a game of FFA 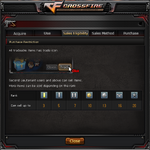 Retrieved from "https://crossfirefps.fandom.com/wiki/Trade_System?oldid=205783"
Community content is available under CC-BY-SA unless otherwise noted.