Swiss Mini Gun is a miniature revolver in CrossFire.

The Swiss Mini Gun is the world's smallest working revolver. It retains the same design found on normal-sized revolvers. Its ammunition, the 2.34mm rimfire, is also the smallest caliber ever made.

In CrossFire, the player holds this gun with the thumb and ring finger on the handle and the fore-finger on the trigger. Despite its size, the revolver's performance in-game is static-wise. It features high damage and accuracy, able to take down opponents with 3-4 shots on the legs, 2 on the body, and 1 to the head. It also has a fast drawing and reloading speed with a small firing sound, making it a useful back-up gun.

It has been reported that the SwissMiniGun brand's owner is actively filing DMCA against YouTubers who uploaded gameplays/review for this gun under its stock name Swiss Mini Gun - while the exact reason is unknown, it can be assumed that either Tencent didn't reach an agreement to use the gun's name in CrossFire or the Swiss Owner is not happy to see his creation being portrayed unfaithfully in CF (as stated above). It's advised to all players to either not uploading any videos about this gun completely, or name it something else (such as the two names used on ES and BR servers) to avoid DMCA issues. 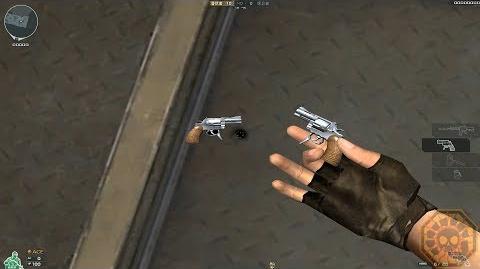 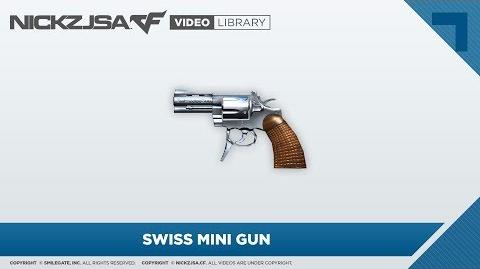 Swiss Mini Gun CrossFire 2.0
Add a photo to this gallery
Retrieved from "https://crossfirefps.fandom.com/wiki/Swiss_Mini_Gun?oldid=206233"
Community content is available under CC-BY-SA unless otherwise noted.