This mode plays out exactly like normal Search & Destroy matches, but every soldiers can carry out different classes in their bags. However, even though they are referred as Super Soldiers, they are far less effective in this mode.

They only have 100 health points and some of the faster classes are slower with their active abilities. Additionally, most of the card stats are significantly reduced. These reduced stats are shown as yellow text on each class cards in this mode only.

Due to mechanics difference, there are some changes with how classes work, which will be described here: 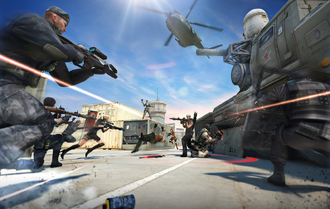 Health / Tips.
Add a photo to this gallery
Retrieved from "https://crossfirefps.fandom.com/wiki/Super_Soldiers_(S%26D)?oldid=176495"
Community content is available under CC-BY-SA unless otherwise noted.