This page tells about the chronological events according to CrossFire's story.

CrossFire tells about the biggest war in the history, a war between the biggest terrorist faction in the world known as Black List against the most well-known and successful counter-terrorist force known as Global Risk.

Both factions fight in many kinds of battles including direct death matches, eliminations, bombings, and even, the most destructible, zombie outbreaks.

Destroy capitalism and economic inequality around the world

Black List is the terrorist faction in CrossFire who has a grudge against its sworn enemy, the Global Risk. Black List is apparently a secretive mercenary organization whose branches and origins are remain unknown to the world. The reason why Black List was formed was to fight against capitalism and oppression by the world's most powerful nations where the poor and powerless countries with weak military defenses are incapable to improve their economic development due to the inequality caused by the capitalist system. Global Risk and their partner, the UN X-File Bureau claimed that they haven't determined the real name of the Black List leader yet. However, Global Risk revealed that the leader has a call sign "Ghost", while the Black List members know him as " Terror". Despite this, actually the Black List is being led by a European male named Hedge Fund. Hedge Fund is a diamond tycoon who controls the diamond markets in England. Initially, Black List made up of militant groups from countries which were torn apart by heavy wars, dominantly from Middle East countries. However, recent outrages against global and domestic economic inequality brought by capitalism has caused embittered former special elite force soldiers from many countries to join the Black List instead. Although so, this is probably the reason why the characters in CrossFire are rather unique since their background are from special elite forces, without even a single character from terrorist background. Black List's goals are to destroy capitalism and its expansions, also to fight for freedom of the people under oppression of the third world nations. Despite this, many accusations made against Black List, claimed that they destroy democratic ideals by increasing violence all over the world. Their main businesses are diamond sellings, illegal gun runnings, private investors, and many other illegal activities. Even their revenue isn't as big as Global Risk has, however, they have enough budget to hire some scientists to create hazardous biological weapons which leads to the cause of the zombie outbreaks.

Terminate all kind of terrorism and its wide spread on Earth

Global Risk is the counter terrorist faction in CrossFire. Their sworn enemy is the Black List. Global Risk is a giant private military corporation without national identity. Sir Alex Roid, the leader of the Global Risk, claimed that the reason the Global Risk is formed due to the inefficiency of the government's actions to curb widespread terrorism. Apparently, Global Risk was founded by Sir Alex Roid and General Edward Wolfe. Both of them are retired SAS members of the British Army. Unfortunately not long after the Global Risk was formed, Wolfe was killed in a vicious battle off the west coast of South Africa. Roid then partnered with an Australian-born American business man and weapon manufacturer, Michael Norman. Together, they quickly elevated Global Risk into an entity with major influences in international affairs. Global Risk is composed of heavily trained former members from the best and most well-known special operation forces from different countries in the world. Their main clients are third world countries who don't have their own national militaries. There are also clients from countries on the black list of terrorists. UN X-File Bureau also gives secret missions to Global Risk which are extremely classified and never been exposed to the world. Global Risk's goals are to terminate all kinds of terrorism actions around the world, putting an end to terrorists once and for all, keeping the stability of the world, and creating peaceful conditions between countries. However, some made accusations against Global Risk, claimed that they rely too much upon powerful countries and their wealth without any justifiable reason as a business corporation. A number of incompetent members are rumored ran away while carrying out operations which based on idealistic peace theories introduced by powerful countries like America or England, making the public to look down on Global Risk's presence.

Where It All Began

Knowing that the world's best and most well-known counter terrorist elite force was after them, Black List decided to focus in destroying Global Risk and their department partners like UN X-File Bureau by any means necessary.

A BL officer is briefing his plan to launch a first attack on a GR base.

BL members in the briefing office.

Some BL members got captured in the process.

The World in Conflicts

War rages between Black List and Global Risk. Their fights had already begun to widespread in many countries around the world.

Commonly, the battle between Black List and Global Risk are mainly involved in death matches. Both factions eliminate each other until only one of the two stands tall victoriously. The goal of the fight is usually to take over an important specific area, examples include the taking of Egyptian ruins, a transport ship, an airspace, etc.

GR personnel rappelling down onto the Transport Ship.

In some events, Black List are also involved in many demolitions and bomb missions where the Global Risk should put a stop to them before their bomb is planted or defuse their bomb before it explodes. Their goal here is usually to destroy an important infrastructure that is valuable to the government of the state.

One GR defusing a C4.

A BL ULP fires at the GR.

The last GR on the scene got shot.

Black List even involved in the usage of the latest stealth technology they had stolen called as "Ghost Technology", which is a suit that is capable to make the user to be invisible if no quick motion is detected. This "Ghost Technology" is commonly used by Black List to assist their bomb missions where they could plant their bomb and guard it without being seen by the Global Risk, although they can only carry their melee weapons since firearms would stay visible to their Ghost suit.

A Ghost appears and sneaks in.

"Have a sweet nightmare, buddy..."

The Ghost takes out another GR.

A Ghost surprise-attacks a GR ULP out of her sight.

Despite all the attempts above, the Global Risk seems able to handle those threats very well. This forces the Black List to create a more stronger weapon far beyond their imagination to end up the Global Risk for good. A very hazardous biological weapon is their answer.

Black List then hired a lot of scientists to do some experiments in creating powerful biological weapons. Various calculations and tests have been made for the experiment. Finally, they developed a small serum, which is bright green in color like a nuclear radioactive.

They tested the serum to the test subject inside a chamber. By wearing a hazmat suit, the scientists went inside the chamber and injected the subject with the serum. They didn't know that this would be the biggest failure they would make.

Suddenly, the test subject was enraged and somehow mutated into a monstrous size, ripped the scientists to death, broke out of the chamber and escaped the Black List laboratory. The creature caused serious infections towards soldiers and civilians, some of them turned into zombies while some others turned into monsters. This was how the zombie outbreaks in CrossFire occured.

A BL injects himself with the serum.

A Slug skin bursts out of his face.

Seconds later, almost all part of his body has morphed.

The Earth Turns to Hell

The zombie apocalypse had occured in various countries. The government hired the Global Risk to stop the outbreaks. Now Global Risk not only must fight against the Black List, but also against the zombies and monsters caused by their failed experiments.

However, this doesn't mean that the battle between Black List and Global Risk comes to an end. They still fight towards each other like before, but sometimes their fight would be interrupted by the zombies which force them to team up together to fight those monsters.

GR team is sent to investigate a BL Lab.

A GR is inspecting a chamber.

An encounter with a Crawler.

A Crawler attacks BL team from behind.

BL team firing on a horde of Crawlers.

BL and GR team up together to fight the zombies.

The zombie outbreaks are getting critical. During a press conference (before the incident in Chicago), Global Risk accuses Black List that they keep doing their research to create more and more monsters to destroy the world. However, Black List denied it and claimed that the one who keep creating those monsters is the Blitz, another evil faction who separated themselves from Black List.

The Blitz claimed that they were the one who were responsible for the zombie outbreaks happening in the world that just got more insane. Their aim is to achieve the world domination by using the biological weapons to destroy both Black List and Global Risk (as seen on their effort in The Invasion on Broken Station), thus spreading terrors among the world's countries to force them to obey under the Blitz's order.

Black List then decided to track the whereabouts of Blitz, while the Global Risk agreed to stop the rest of the zombie outbreaks caused by their crazy experiments. 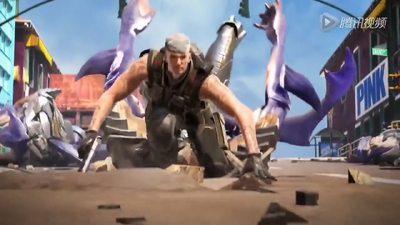 White Wolf of the Black List side took down multiple Hammerheads, one of the monsters created by the Blitz, in an awesome way.

Retrieved from "https://crossfirefps.fandom.com/wiki/Story?oldid=189265"
Community content is available under CC-BY-SA unless otherwise noted.