In CF China, it's the same stock variant along with the 10th-anniversary mark of CF China written in Chinese. Uniquely, this smoke grenade variants have fast drawing speed and emit orange smoke on impact when getting landed to the ground or a hard object, which reduces the time to wait for the grenade.

In CF West, it is a variant of the Smoke Grenade-CFS and features a CF logo on the weapon with an orange X in the background symbolizing 10 as a Roman numeral in years of service. Also, its killmark has the acronym 'SGW' for Smile Gate West. 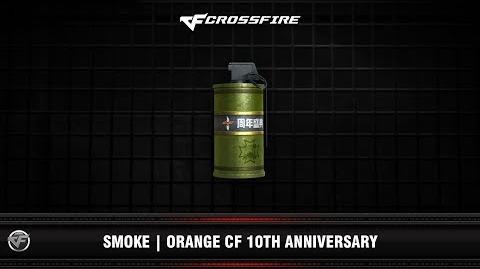