Start a Wiki
Sheep Mode is a Free For All spin-off featuring various sheep that will follow whichever soldiers collected them whilst giving the soldiers few points and providing them with various perks sometimes too.

The map is filled with various sheep that soldiers may collect to increase their sheep bar at the top of the screen, thus scoring points. When a soldier kills an opponent, he collects half of that soldier's herd (rounded up); although their bar will reset upon getting killed.

All collected sheep are running after the holder and have one-shot ability, that gives additional points and make this game snake-like game-play. While collecting sheeps increases players' points and helps earn special perks, the sheep are also a big giveaway for other players to track, plus everyone can see a Sheep Icon on an opponent with special sheep that earned perks.

There are seven type of Sheep, all of them with different colors and attributes, most common being the white sheep, which can easily be found all around the map while the rest will appear at random for soldiers to compete for (indicated by their respective color icon). Details about each sheep type and their attributes can be found in the next two tabs.

Once the round is about to end (either a player is getting close to the objective score or time running out), everyone will automatically get the Red Sheep melee and enters an all-out battle, while also competing to get the gold sheep until the round finish.

Up to 16 players in a room; the host may choose the objective to be a set amount of points (50k to 120k points) or time limit (5 to 12 minutes). Additionally, most of the restrictions can be applied as well; which includes: Pistol, Sniper, Melee, Headshots and Shotgun Only settings. 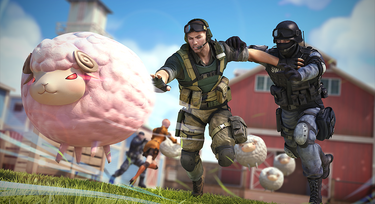 Retrieved from "https://crossfirefps.fandom.com/wiki/Sheep_Mode?oldid=186055"
Community content is available under CC-BY-SA unless otherwise noted.