Serbu Super-Shorty is a shotgun featured in CrossFire.

The Serbu Super-Shorty is a sawed-off pump-action shotgun featuring a very short barrel and a foregrip attached to its slide. These features make it somewhat similar to the Mossberg 500 Chainsaw and M37 Stakeout.

Due to its ultra-compact size, it can only hold 3 shells in its magazine tube with 27 shells in reserve. It has the same firing speed with KS-23, but its reload cancel is faster since players won't need to pump the last shell in to shoot. It is also very lightweight for a shotgun.

The Super Shorty has the most pellets per shot, which spread quite narrowly. This allows it to inflict consistent one-hit kills at close range, and score high damage at mid-range. However, it suffers from a very huge crosshair, restricting its aiming effectiveness.

Knight Blue
Add a photo to this gallery 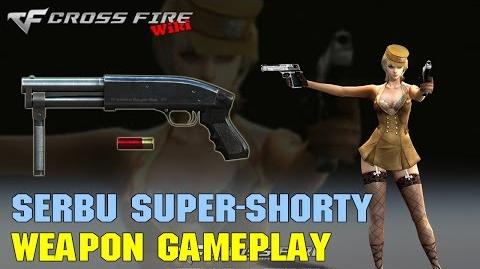