SWAT-Moscow is a female character featured in CrossFire.

Judging from her name, she's probably from the SWAT division based on Moscow, Russia.

SWAT Moscow's GR wears a slightly revealing blue winter outfit, exposing her shoulders and chest. She also wears a thigh high boots plus a pistol holder on her right leg.

SWAT Moscow's BL also wears a winter outfit but a brown one. She has a goggles hanging from her neck and a small bag on her back. Different from GR, she wears winter boots and also a pistol holder on her left leg. 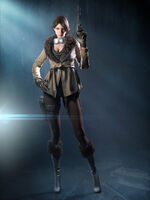 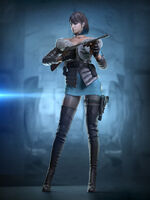 Retrieved from "https://crossfirefps.fandom.com/wiki/SWAT-Moscow?oldid=179858"
Community content is available under CC-BY-SA unless otherwise noted.