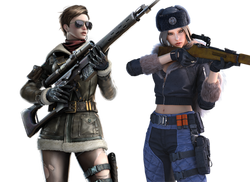 Sniper Russian Armed Force is a female character in CrossFire.

Based on their look, S.R.A.F are intended to be assassin squad that fights in cold weather, which is common in Russia. BL model wears a long brown coats with brown gloves and have sunglasses to cover their faces, while GR wears a blue beret and have armored blue vest which still reveals her belly, plus long blue pants with accessories straps.

Renewal
Add a photo to this gallery

HUD (BL)
Add a photo to this gallery

CF SRAF
Add a photo to this gallery
Retrieved from "https://crossfirefps.fandom.com/wiki/SRAF?oldid=196156"
Community content is available under CC-BY-SA unless otherwise noted.