SPAS-12 is a combat shotgun featured in CrossFire.

SPAS-12 is a shotgun that compared to its rivals, it fires more pellets per shot, is more powerful, holds more ammo and has a longer attacking range. It's inferior some aspects such as reloading speed, firing rate, draw speed and has a higher leaning curve than the XM1014.

Like most shotguns, it can be fired while reloading, however unlike the XM1014, the player must pump the shotgun after fully reloading and before firing again. Its draw time is significantly longer than its rival and many other assault rifles and sub-machine guns.

Hit and Run or Scavenger tactics work very well with all shotguns if teamwork is used. In "Hit and Run" its pellets may not kill the enemies but may injure enemies enough for your teammates' assault rifles and sub-machine guns to pick them off. In "Scavenger" the shotgunner can pick off injured or injured-priority shots by flanking or sneaking up behind the targets.

Ghetto
Add a photo to this gallery 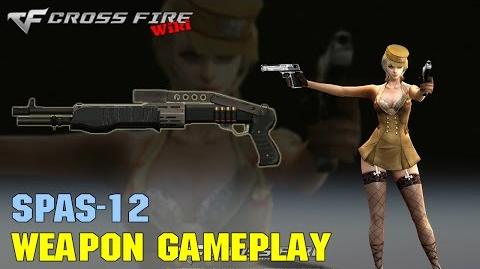 CrossFire - SPAS-12 - Weapon Gameplay
Add a photo to this gallery
Retrieved from "https://crossfirefps.fandom.com/wiki/SPAS-12?oldid=188504"
Community content is available under CC-BY-SA unless otherwise noted.