Scalable Offensive Hand Grenade-Ghetto or simply SOHG-Ghetto is a throwable weapon that is featured in CrossFire.

SOHG-Ghetto is a pair of grenades which are produced by Nammo AS of the United States. In addition to a Ghetto skin, this grenade takes an unique cylinder-shapped form and it's made of two parts stacked together, which can be stacked/unstacked by pressing RMB.

If unstacked, players can throw the grenade twice, but each will only deal a moderate damage and a small blast radius. But if the grenade are stacked, the explosion does major destruction and damage toward the enemy.

It should be noted that SOHG-Ghetto is heavier than other Grenades when stacked, so it won't travel properly at long distance - proper aiming is required to make this grenade land on the expected location.

Exploding Effect (Stacked)
Add a photo to this gallery 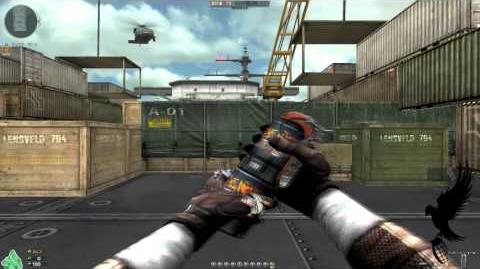 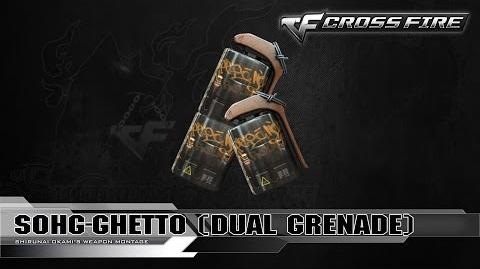 CrossFire China 2.0 - SOHG-Ghetto (Dual Grenade) ☆
Add a photo to this gallery
Retrieved from "https://crossfirefps.fandom.com/wiki/SOHG-Ghetto?oldid=207283"
Community content is available under CC-BY-SA unless otherwise noted.