SCAR Heavy is a battle rifle featured in CrossFire.

The SCAR-H is a battle rifle that excels in close combat, but not so much elsewhere. It has high damage, average recoil, and rate of fire makes it particularly stable when being fired at full auto. Its group on full auto is a bit random but generally swerves around the x-axis. With a bit of practice, the full-auto recoil can be mostly controlled to make it excel in close and medium combat as well.

Its downside is that it has a long reload time and has little use at long range due to its average rate of fire and unpredictable shot grouping that severely limits it's burst potential, restricting the user to use a single shot to get the most out of it.

Therefore, it is much more effective at close range, compared to the SCAR Light which can be fired full auto at a distance and still be fairly accurate. It still able to get you out of most close combat situations and is a good weapon to own for less experienced players.

It uses a standard 30-round magazine capacity, like many other assault rifles. Some versions, however, have the magazine carrying up to 35 rounds.

Red Dragon
Add a photo to this gallery 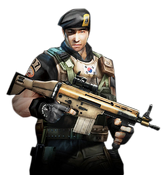 Artwork.
Add a photo to this gallery 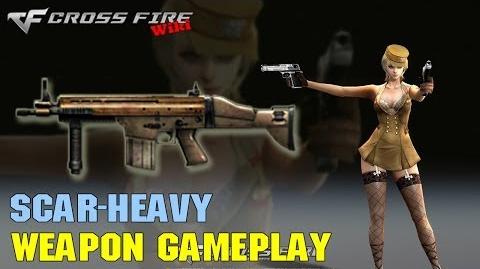 CrossFire - SCAR-Heavy - Weapon Gameplay
Add a photo to this gallery
Retrieved from "https://crossfirefps.fandom.com/wiki/SCAR_Heavy?oldid=204354"
Community content is available under CC-BY-SA unless otherwise noted.