Start a Wiki
New Resort is a Master Hero Mode X map sets at a desolated summer resort hotel. This is an expanded version of the original resort map, which alters the layout and the spots while adding new areas and new spots as well. 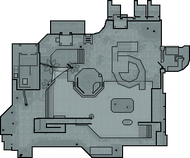