RPK-Gold is a machine gun variant of RPK featured in CrossFire.

It's an advanced variant of the normal RPK. It has an increased magazine capacity up to 120-rounds per magazine (110-rounds per magazine in some versions), slightly higher damage dealing, faster firing rate and better accuracy than the original RPK, and a much lighter weight comparing to other machine guns.

In fact, many players choose this gun because of its versatility; it's not too heavy to move around with and has good accuracy allowing for aiming at mid and long ranges. 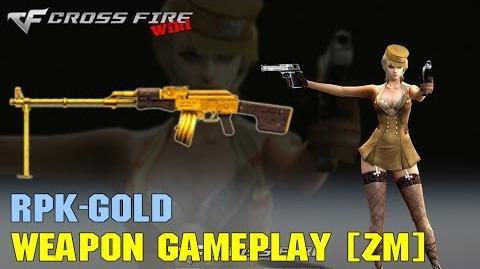 CrossFire - RPK Gold - Weapon Gameplay-0
Add a photo to this gallery
Retrieved from "https://crossfirefps.fandom.com/wiki/RPK-Gold?oldid=183363"
Community content is available under CC-BY-SA unless otherwise noted.