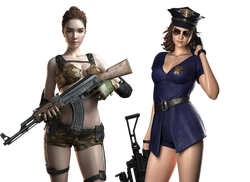 Ngọc Trinh is an exclusive female character only available in CF Vietnam.

She is based on the real life celebrity Ngọc Trinh, serving as a Vietnamese covert-ops for the V.A.C.F (VN-Asia Covert Force). Ngọc Trinh appears to wear a blue female cop uniform (GR) and a jungle bikini set (BL) - much like FOX, she has no advantage of light equipment nor disadvantage of suffering higher damage due to lack of protection. She also features a unique Vietnamese voice which is exclusive to players using her, and comes with the reduced smoke effect (Stackable with its counterpart item).

GR
Add a photo to this gallery

Global Risk (HUD)
Add a photo to this gallery

SAS 2.0 wihout Smoke Helmet
Add a photo to this gallery

Retrieved from "https://crossfirefps.fandom.com/wiki/Ng%E1%BB%8Dc_Trinh?oldid=189081"
Community content is available under CC-BY-SA unless otherwise noted.