New Black Market upgraded the interface of the Black Market and added a few more features which makes the system more generous and encouraging players to keep on going for the main prize. Instead of the old Capsule Machine, it's now a large revolver cylinder resembling Russian Roulette. It is now possible to setup the machine (space-bar key) before spinning it. Players still get to charge their spinning power which decide how long the cylinder will spin - once stopped, it will shoot out 3 prizes (2 prizes in Mini Capsule) chosen randomly from the pool. If the Golden Capsule lands in the barrel, it will be a guaranteed best prize win. Prizes will now show up on the right side of the screen with best prize pinned on top and highlighted in yellow.

This system introduces the Lucky Gauge: everytime a player fails to win a permanent item in a cash crate, the gauge increases. When the gauge is full, the next crate spin (excluding GP and Free Ticket crates) will have increased winning rate and all the prizes won will double. If the player still does not win the best item with a full gauge, they will be given a free crate ticket, which they can use on any cash crates of their choosing. Apparently, the Lucky Gauge takes approximately 20 crate spins to fulfil from zero.

Every item won (both permanent and temporary items) are now moved onto a new storage tab in the Black Market. From there, players may transfer their items to their personal storage or dismantle some of them into coupons - only temp weapons can be dismantled however. This allow users to not get any unwanted duplicate weapon if they don't want it.

The coupons also changed, for starters, the cap was increased (depending on each server), to accommodate the fact that items can be turned into coupons. The section is now a full list of purchasable items, getting rid of the three items per row and its possible duplicates, giving much more options as it is not capped at three items per coupons milestones anymore

Listed below are issues with the new Black Market system that hasn't been fixed up to date: 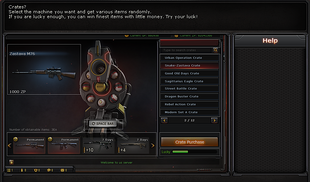 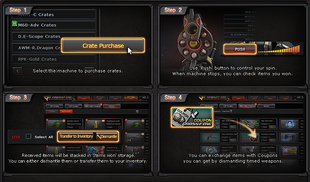 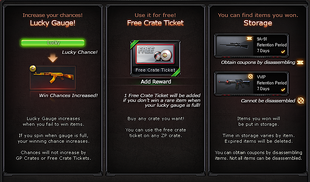 Guide Page 3.
Add a photo to this gallery
Retrieved from "https://crossfirefps.fandom.com/wiki/New_Black_Market?oldid=195207"
Community content is available under CC-BY-SA unless otherwise noted.