This article is about the character in Hero Mode X. For the normal variant of this character, see DX Heroine. 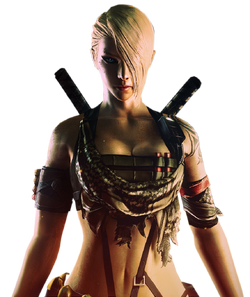 Nemesis is the Heroine in the Hero Mode X expansion pack.

The Nemesis wear female combat top and military pants and shoes. Like the Commando, she also have many attachment around her suit: Grenade Launcher bullet around her waist, mini bags, pistol case and the pistol bullet case around her right arm. However, these attachments are also unusable like the attachments of the Commando. The only usable weapon of the Nemesis is the Dual Axes. Like Commando, Nemesis also have a tatoo on her left shoulder which is also shows a skull.

Nemesis deals the same damage to mutants as Commando does, 1000 HP for primary attack and 4000 HP for secondary attack. Also deals twice the damage when hitting mutants' head.

Nemesis is available only in later-released Mutation Mode maps (Carnival and Resort onwards). She has a similar role to Commando, but equipped with the Dual Axes to exterminate the Mutants. Like the Commando, the Nemesis character has bruises all-over her body. She also has the same amount of HP and is not much different from the Commando, so most of the tips and strategies for the Commando can be applied to her.

Unlike the Commando, Nemesis has a shouting voice when using secondary strike. It can be assumed that she is not very strong to handle the Dual Axes so she has to "power up" or it can also assume that she become enrage when striking with both Axes.

Artwork #2
Add a photo to this gallery

HUD (Gloves have changed skin)
Add a photo to this gallery