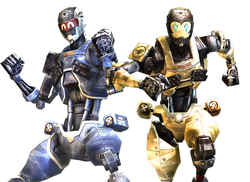 N-22 is one of the characters in CrossFire, available only in CF Vietnam.

N-22 was created by Black List scientists in hidden cyber factory in The Mine, but Global Risk task forces launch an assault on the factory and captured the robot production line so it was used by both sides to replace soldiers on human battlefield. It is the first and the only character that's not a human.

After the 2010 incident, FPS games are criticized a lot about human killing - even after the Knife had been removed, human characters were still present, which was a problem since there is no way to remove default characters. In an attempt to cool down the media, VTC decided to update a non-human character, specifically "Robot", so CF became a "non-human shooting game" (Even though not all players may buy it). N-22 was the answer, and surprisingly, it actually worked - the media eventually left CF alone after N-22 was released. The government still watches however, so all subsequent characters are put into Black Market as a countermeasure - this way, not all players can own "human characters", so CF is still considered "non-human shooting game"  in Vietnam.