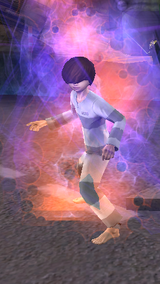 Mysterious Boy is a special character, appearing in EMD Lab and Devastated City.

After defeating Giant Predator, it will explode and reveal the Predator Core, a spaceship with Mysterious Boy inside. He uses the same laser attack as Giant Predator to try to kill Soldiers.

It is said that Mysterious Boy was the one teleporting the GRX team trapped inside EMD Tower as it was about to collapse, and he gives 'em a mysterious potion that enables them to slide and kick while fighting at Devastated City. This implies that Mysterious Boy was a victim of Giant Predator and after killing the Predator Core, he was freed and did his job to save the GR force that released him.

Mysterious Boy appears in 1st Bonus Round (8th) where he is chased around the map by 320 moles, and soldiers have to protect him in 50 seconds to earn bonus point. Whether he survives or not won't affect the round's outcome.

Retrieved from "https://crossfirefps.fandom.com/wiki/Mysterious_Boy?oldid=137588"
Community content is available under CC-BY-SA unless otherwise noted.