Mutation Mode is a round-based mode that throws soldiers into quarantined territories in an attempt to survive armies of playable mutants characters. The mode is available in every version of the game under the following alias:

Both factions, now teaming up, must prepare for the incoming infection as they have only twenty seconds to find a decent spot to defend in their current quarantined zone. Once the countdown is done, two soldiers will turn into mutants and attempt to spread the infection onto every soldier. It is possible to completely eradicate every mutant as they do not respawn once killed.

Mutants have a lot of health points (starting at 2000), but they can only use melee range attacks (their own claws or the Mutation Spike). The two "host" mutants automatically start at berserk level, all other infected mutants will start at a normal level and have to work their way up to use their special skills.  Mutants can also evolve, absorb or recover health if they want to survive as much as they can. When mutants are evolving, they gain a few more health points and will eventually be able to use special skills depending on their current mutant.

If soldiers ever need additional ammunition or weapons, they will be able to collect supply crates that drop every 50 seconds (2:10, 1:20 and 0:30). Additionally, there's a Christmas version of the supply crates, however, it hasn't been brought back for a while. Whatever these boxes contain vary in every version; these are the common items:

The mode offers a great variety of quarantined type maps with various spots available to hold off the forthcoming horde of mutants. These maps are all also available in both Hero Mode and Hero Mode X variants:

The mode offers a great variety of quarantined type maps with various spots available to hold off the forthcoming horde of mutants. These maps are all also available in both Hero Mode and Hero Mode X variants:

This mode is based on Counter-Strike Online's Zombie: The Original (formerly known as Zombie Mod 1 in the past). However, CSO introduced new features in a new mode named Zombie: The Mutation (Zombie Mod 2), which included: Evolution, Absorbing, Supply Crates, Health Recovery and new type of playable Zombies characters.

Crossfire China, Vietnam & Japan were added the same Zombie: The Original mode for their version, featured a slightly different Dread model and no Supply Box, Evolution, Absorption, Health Recovery, and Mutants' skills, but it was replaced by recently Mutation Mode.

CrossFire added the same, by adding a new Mutant (and more later on) and the aforementioned features, but decided to add it to the original mode instead of making a totally new one as CSO did. Surprisingly, they even used most of their Zombies ideas for the different Mutants available in Mutation Modes here.

Their next installment for this mode also made its way onto CrossFire; CSO's Zombie: The Hero (Zombie Mod 3) brought Hero Mode to CrossFire. Although they did more variants, CrossFire started to make their own, starting with a mode based on previous ones but with a new set of rules and characters, thus, Hero Mode X was born.

VTC (publishers of the Vietnamese version) decided to use CSO's original mode names for every variation in their version, starting with Zombie Mod 2. However, it obviously left a gap at the beginning, as CrossFire did not make a separate variation only for the sole purpose of adding new features as they simply ported it to Mutation Mode.

Almost all players often camp in this mode. The others run away around the map with moving skills so that the mutants can't get them. We call it parkour.

After Mutation Knight Mode, the next variant of Mutation Mode is Mutant Escape Mode. It is obviously inspired by CSO's Zombie Escape. Its playing style is similar to CSO's, but with increased damage for soldiers' weapons (which can reach up to 800%); furthermore, there are many warp portal that soldiers must open to continue the run. 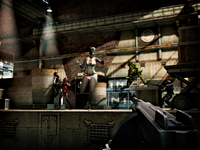 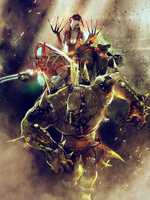 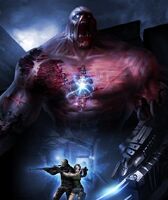