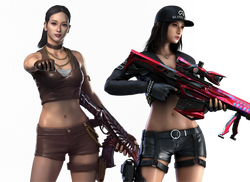 Mocha is an exclusive female character available in CF Philippines.

Mocha is the fourth character based on real-life celebrities, after Miss A, 2PM and Ngoc Trinh. Her BL and GR outfits are almost identical, except the BL one feature sleeveless brown tank top with brown gloves and she wears a grey shirt underneath, while GR one has full sleeve black tank top with black gloves, plus she wears a black cap too. In both forces, she wears short pants with pistol holder on the right side (left for BL). 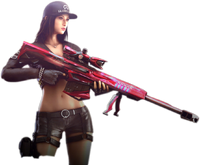 Retrieved from "https://crossfirefps.fandom.com/wiki/Mocha?oldid=171078"
Community content is available under CC-BY-SA unless otherwise noted.