Master Hero Mode X (or Evil Terminator Mode) is a map add-on of the Mass Mutation Mode, and is only applied to some specific maps.

Similar to the Parasite Expansion, this map option is mostly based on the classic Hero Mode X. It has unique mechanics found in Hero Mode X but also features some new features from other Mutation Mode variations such as Mutation Knight Mode and Mutant Escape Mode.

Unlike Hero Mode X (including its Havoc/Ranger Expansion and Parasite Expansion) which can be played in any Mutation Mode and variants' maps, due to the high number of players and new mechanics, there are new maps available exclusively for this mode option, and most of them are based on the popular Hero Mode X maps.

On January 2020 update in CF China, this mode has released two new character options for players - Master Hunter and Demon Terminator. They are the equivalent of Master Hero and Evil Terminator, but with different weapons and skills.

The Supply Box has added the AT4 from Battle Mode, which deals with massive damage to mutants. Beside additional Evolution Points, mutants will get bonus items among picking them up.

On September 2020 update in CF China, this mode got two additional character options - Master Ascetic Hero and Void Terminator. They are also the equivalent of Master Hero and Evil Terminator, but with different weapons and skills.

Commando's health point has been increased from 5500 to 9000, helping him survive in the mass horde of mutants. Similar to Subject Alpha's Shapeshifter skill, normal mutants are allowed to select any other purchased mutants after respawning, giving them options to pick suitable mutants for the gameplay. The mutants options have been re-ordered based on the mutants' popularity, however.

Beside that, the Random Buff mechanic was introduced, making the battle more intense, and this options will make it so that every round will have a random buff applied to both sides. It is currently only available in the following maps: Dawn Village & Void Island as of now. Here are the available buffs and their effects:

Xeno still joins the battle to beat the soldiers, but unlike Hero Mode X and similar to Mutant Escape Mode, up to two players will turn into Xenos upon the countdown (depends on the number of players, otherwise it's still one Xeno). He still can use his Bulletproof Shield, but now he only takes 300 HP to use it instead of 500 HP like before. His default health point also got increased (9000 HP for Level 2, and 12000 HP for Level 3).

During the round, Xeno can pick the blazing Evil Box dropped on the map, and choose to transform into Evil Terminator, Demon Terminator, Void Terminator or Queen Terminator. At this time, they can use their different skills along with higher health points (13000, 16000, 14000 and 12000 HP, respectively).

For normal mutants, up to two players will be chosen as berserk mutants. Mutants now only require about less than a second to absorb point from other dead mutants. Like Mutant Escape Mode, they also have faster health recovery as well. Like Mutation Knight Mode, they can pick the black Supply Boxes dropped around the map to gain Evolution Level, along with an additional 500 HP, Bulletproof Shield in 3 seconds, or Instant Level 3 Boost (if lucky). When defeated, mutants still save both Evolution Level and Evolution Point when respawned. After evolving to Level 3, mutants can also pick the Evil Box and choose to transform into Terminators as well.

Commando is also in the battle to fight against Xeno and the mutants; however, he got some disadvantages this time. Although his health point has been increased to 9000, his Dual Kukri now deals lower damage against mutants. To make up for that, he can pick up the freezing Hero Boxes dropped on the map and choose to transform into Master Hero, Master Hunter, Master Ascetic Hero or Mystic Hero. At this time, his/her health point got up from 12000 HP to 15000 HP (vary between the Hero), which is higher than any previous special characters. Commando will respawn as a mutant after being defeated, similar to Hero in Mutant Escape Mode while the Special Heroes' death are permanent.

For normal soldiers, they can pick up black Supply Boxes dropped around the map to receive items such as FAL Custom Camo-Stray, AT4, Bio Grenade, Stun Grenade (Wide) or Mutation Vest (only 1 per soldier), but at the same time, they also have their primary weapons' ammo refilled. Special Heroes can pick it up to gain an additional 300 HP as well. 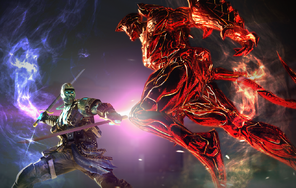 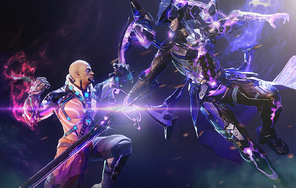