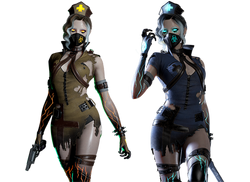 Maiden-Copycat is a normal character variant of Maiden.

While not specifically stated in-game, Maiden-Copycat is a BL's controllable mutant that mimics the original Maiden, to combat GR without reducing their manpower.

This character has the same appearance as Maiden 2.0 but with a neon biohazard logo on her face mask and glowing lights on her eyes. Both BL and GR form shares the same ripped-up combat medic uniform with bracelets and long gloves that feature glowing neon.