MTs-255 is a shotgun featured in CrossFire.

MTs-255 (Russian: МЦ255) is the very first revolver-styled Shotgun available in CF, and it combines both 687 EDP's firepower and M37 Stakeout's ammo capacity into one.

This gun has a very fast drawing speed (same animation as Double Defense Shotgun), deals lethal damage at close to medium distance and has a fairly small spread, allowing it to score full damage easier at mid range. It carries 5 shells in its cylinder with 20 in reverse, and a similar reloading animation to Raging Bull. The weakness lies in its small amount of pellets, making Headshot quite hard to pull of at mid range. Body shot is recommended when using MTs-255 in order for it to score maximum damage.

In-game screenshot
Add a photo to this gallery 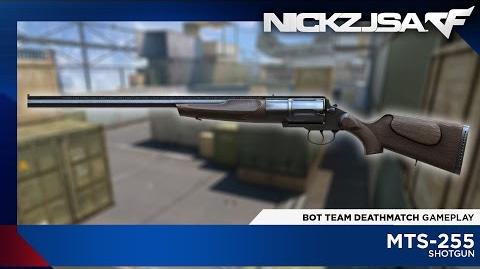 MTs-255 - CROSSFIRE Russia 2.0
Add a photo to this gallery
Retrieved from "https://crossfirefps.fandom.com/wiki/MTs-255?oldid=190254"
Community content is available under CC-BY-SA unless otherwise noted.