MSG90 is a semi-automatic sniper rifle featured in CrossFire.

MSG90 is a militarized version of the PSG-1, with additional improvements like reduced weight (1 kg lighter than the regular PSG-1) and faster firing speed. The MSG90 fires 7.62x51mm NATO ammunition. It has high accuracy, fast firing rate (only if scoped), and also light weight. However, it mostly takes 2 shots to kill enemies in normal health, although hitting on enemy's chest in a very close range might occasionally kill him in one shot.

Due to the reduced weight fact stated above, MSG90 is pretty light to be carried around, despite that it acts as a sniper rifle in-game. 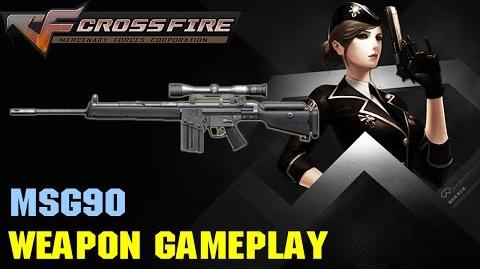 CrossFire VN - MSG90
Add a photo to this gallery

Retrieved from "https://crossfirefps.fandom.com/wiki/MSG90?oldid=203039"
Community content is available under CC-BY-SA unless otherwise noted.