MK23-Silencer is the suppressed variant of the MK23 pistol and the first silenced pistol in CrossFire.

The MK23-Silencer is the first suppressed pistol in CrossFire. It has slightly more stopping power, accuracy, and the same rate of fire as the original MK23. It also has been enhanced with a suppressor, increased ammunition capacity, and reduced reloading speed (simple magazine insertion without the twirl animation of the original). 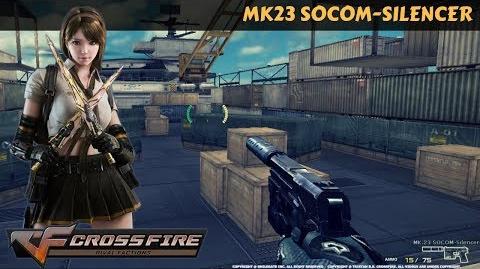 CrossFire Vietnam - MK23 SOCOM-Silencer
Add a photo to this gallery
Retrieved from "https://crossfirefps.fandom.com/wiki/MK23-Silencer?oldid=195182"
Community content is available under CC-BY-SA unless otherwise noted.