M4CQBR-Dual Mag is an assault rifle variant of M4CQBR in CrossFire.

The M4CQBR which modified with a retractable buttstock, a handguard, a silencer, and a holographic sight, now also modified with dual magazine that makes reloading process faster.

It has no big differences with the original M4CQBR, except has a dual magazines that makes reloading process faster than the original.

This weapon able to hold 35 rounds per magazine.

Ditto. Dot-sight
Add a photo to this gallery 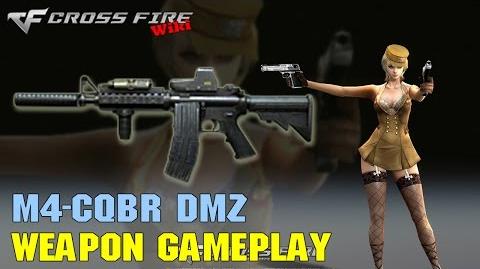 CrossFire - M4CQBR DMZ - Weapon Gameplay
Add a photo to this gallery
Retrieved from "https://crossfirefps.fandom.com/wiki/M4CQBR-Dual_Mag?oldid=194102"
Community content is available under CC-BY-SA unless otherwise noted.