M4A1-Custom Devil Wing is an assault rifle variant of the M4A1-Custom.

M4A1-Custom Devil Wing features a purple-black color scheme with a glowing purple aura around its body and an animated devil eye on its red dot sight. Similar to Gold Phoenix weapons, it features a special wing effect when drawing and reloading, albeit a dark wing one.

Besides aesthetics, the Devil Wing features the same stats as the original M4A1-Custom and has a 35 round magazine (+5), except in CF Vietnam where it doesn't have any ammo boost. 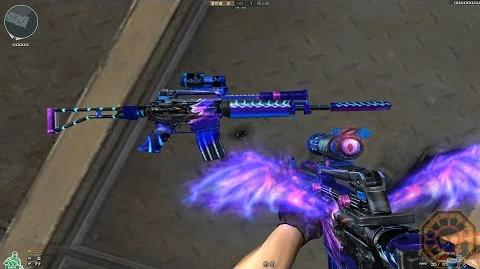