M16A3 LMG is a kind of machine gun featured in CrossFire.

M16A3 LMG is a light machine gun based on the M16 series. This weapon features a 100-round drum magazine and carries 100 rounds in reserve. This weapon also features a red dot sight for higher accuracy.

This weapon's main drawbacks are its unstable firing tendencies, merely adequate accuracy, and high recoil. These are all tendencies shared in the machine gun class, though.

The M16A3 LMG also has a steep price point and does not have the ability to 1-hit headshot at longer ranges. 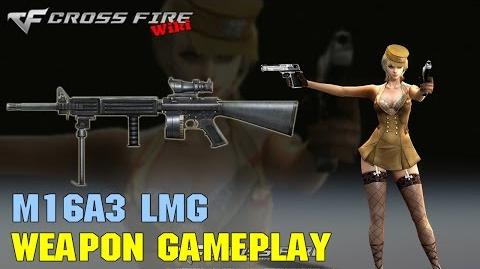