Start a Wiki
Lost City is a Mutation Mode, Hero Mode and Hero Mode X map located within the depth of an unearthed lost city near the Tigris River. It features a large arch entryway, few tombstones, and most importantly, a ziggurat.

The arch area allows for a couple of soldiers to hold together as they shoot at any mutants coming from the platforms in front of the said arch. But, it should be noted that Maidens have an easier time to infect soldiers by jumping from the lower platform.

The aforementioned platforms offer a lot of space for soldiers with the stack of crates and pillars as the main focus points for defense. However, just like the previous spot, the lower platform allows the mutants to catch the soldiers off-guard if they're not careful.

A very solid spot, outside of Hero Mode X, as there's only one entrance while also having more than enough space for every alive soldier. The only real danger would be soldiers being too close to the entrance or the fence, as they would allow mutants to quickly create chaos from within.

A thin ledge that runs along the wall near the cage, which can hold many soldiers, albeit somewhat cramped. The main focus should be the stack of boxes leading the spot, but eventually, mutants may attempt to boost from the back of the ledge to climb it.

Soldiers can boost each other and/or self-boost onto the block at the very top of the ziggurat. It is not the best holding spot, but considering that mutants are likely to focus on larger groups camping in more optimal spots, it should be fine to hold until the horde finally comes.

There's a tunnel inside the ziggurat that can be a somewhat decent spot for a small group of soldiers as they cover the main entrance with maximum firepower. However, the back entrance, while it is not easily accessible, it should be eyed out at all time.

This metal walkway in the side room provides a somewhat decent spot, should there be enough soldiers to cover both sides effectively. This spot is relatively safe from mutants boosting, but if anything, any soldiers standing on the railing are likely to notice and stop them from doing so.

The side room also includes two alcoves with a limited amount of spaces. As such, it is far from being effective spots considering the lack of optimal space between the entrance and the back wall of both alcoves leaves little reaction time for the soldiers to react, especially against a large horde. 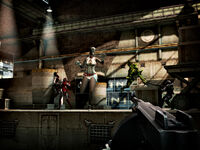 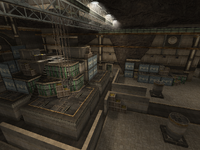 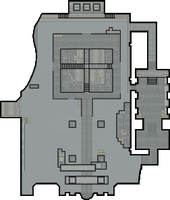 Layout
Retrieved from "https://crossfirefps.fandom.com/wiki/Lost_City_(ORIG)?oldid=207941"
Community content is available under CC-BY-SA unless otherwise noted.