Start a Wiki
New Lost City is a Master Hero Mode X map sets within the depth of an unearthed lost city near the Tigris River. This is an expanded version of the original Lost City map, which alters some of the layouts and adds new spots for the soldiers.

This is the same map, for the most part, since the textures are exactly the same (possibly to avoid backlash, given the map's popularity), unlike Dawn Village, which received a complete overhaul graphically. But, the layout itself has some minor tweaks, including three new spots, ziggurat's roof replaced, a slight modification to the archway area, and then two new sectors that serve as extra respawn points for the mutants, given the larger amount of players.

The archway now only has one access, as one of the pillars was removed. Soldiers can now focus on defending the remaining pillar. Maiden and Enchantress can't jump over the middle anymore, but soldiers should be very careful of the Evil Terminator's fireball attack since the archway is still very much exposed after all.

The platforms and surrounding props are now slightly further away from the archway but everything is still positioned similarly as before, minus that one pillar. The general strategy still holds, albeit with probably more firepower considering the likelihood of there being many Xenos roaming around.

This new setup atop the ziggurat now features a somewhat more complex route to the very top. It is definitely a safer spot than its predecessor, but there are still many angles to keep track of. It should be noted that the moment this spot is unoccupied, the scaffold next to it becomes compromised.

This new scaffold in the main area can support a decent amount of soldiers, which would defend the main access point. However, not only is this spot highly exposed to fireballs, if the top of the ziggurat is also not secured, mutants may use that to jump onto the scaffold, making it harder to defend it.

The side room now also contains a scaffold right in the middle attached from the ceiling. It can be accessed via one of the alcoves, which would be the main point of focus for soldiers while checking the metal walkway too, as mutants could access the scaffold from there. 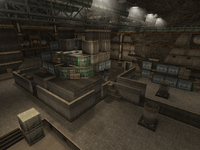 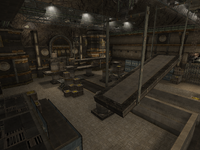 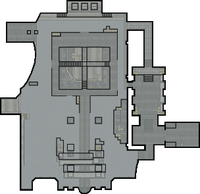 Layout
Retrieved from "https://crossfirefps.fandom.com/wiki/Lost_City_(EXPN)?oldid=207920"
Community content is available under CC-BY-SA unless otherwise noted.