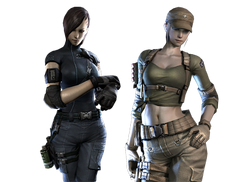 LA SWAT is one of the female characters available in CrossFire.

Judging by her name, she is comes from the SWAT division based in Los Angeles, where SWAT was originally established.

The GR character wears a light armor suit with dark blue color scheme, similar to SWAT, but it has short shelves, and she wears arms protection with black gloves. BL character sports a more casual outfit with grey/tan color scheme, plus a cap for sunlight protection. She wears a short t-shirt that reveals her bellybutton, plus straps for shotgun shells on her right arm.

CF Victoria
Add a photo to this gallery
Retrieved from "https://crossfirefps.fandom.com/wiki/LA_SWAT?oldid=198926"
Community content is available under CC-BY-SA unless otherwise noted.