It features the same model and animations of the Kukri-Beast, but it has a full gold plate texture and silver steel texture on its body. Its stats is also similar to Kukri-Beast, with fast primary and secondary attack compared to normal Kukris.

Due to the weapon being a reskinned version of the Kukri-Beast and not a VVIP item, it doesn't have any special effects such as quick draw and slashing effect but it still retains the special slashing sound upon hitting the enemy, however. 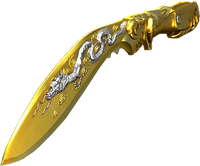 HUD (BL - Male)
Add a photo to this gallery

Retrieved from "https://crossfirefps.fandom.com/wiki/Kukri-Beast_Noble_Gold?oldid=187980"
Community content is available under CC-BY-SA unless otherwise noted.