Start a Wiki
King's Valley is the second Mutant Escape map; this one being at an Egyptian site high up in the sky. It is a very large map that is divided into five sections ranging from a canyon area, a mine shaft tunnel, pyramid interior, etc.

Floating Island
The starting area that leads up to a small fortress, connects to the high tower to the left with a thin bridge. There's a shortcut staircases for mutants to reach the high tower to the left (Double jump required).
The Tunnels
A short valley leading to a thin tunnels with step stairs and a small concrete block that slows the mutants down somewhat. Upon retreating inside, soldiers must jump two gap to activate a new door that lead to the portal, at this point a speed boost is activated at the tunner's entrance, allowing mutants to quick-boost to the Portal Room.
The Palace
Description pending.
Mine Shaft
Description pending.
The Pyramid
Description pending. 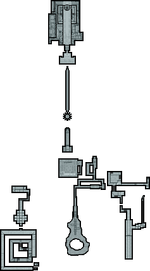