Katana is a Japanese melee weapon and the first sword ever released that featured in CrossFire.

The Katana is a traditional weapon of the Samurai. This weapon has a very long reach and stronger but also more heavier than the standard Knife.

The primary attack or LMB consist of slow two-handed slashes. While the Katana's swings have a longer range than primary attacks of other weapons such as Kukri or Axe, it also more slower and actually a bit weaker.

The secondary attack which is a horizontal slash, can be "prepared" - if holding RMB, player characters will sheathe the sword and will only release when RMB is released. It takes a long time to prepare and the recovery time after the swing is a bit lengthy, but it has the longest range of any melee weapon attack in the game. The player can also move around, albeit much slower, in this prepared state.

The primary attack needs 2-3 hits into the chest to kill, 2 primary hits in the head to kill, or 1 secondary hit (anywhere on the body) to kill.

Gold
Add a photo to this gallery

Discarded HUD (CF China)
Add a photo to this gallery 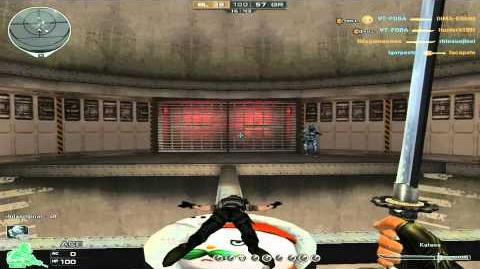 Katana Gameplay
Add a photo to this gallery
Retrieved from "https://crossfirefps.fandom.com/wiki/Katana?oldid=192062"
Community content is available under CC-BY-SA unless otherwise noted.