KAC ChainSAW is a machine gun in CrossFire.

This gun comes with horizontal handling bar on top with the trigger at the back (like a chainsaw).

Like most machine guns in CrossFire, KAC ChainSAW features a standard 100-round magazine with 100 rounds in reserve, making it as useful as regular machine gun found in-game.

The biggest difference is it has low firing noise and pretty light, so Ghost hunters will find it useful for their mission. KAC ChainSAW has fairly good firepower and accuracy, though reloading time is a bit slow.

HUDIcon
Add a photo to this gallery 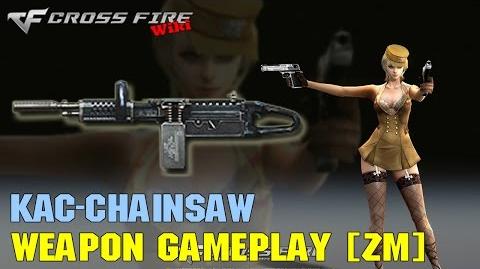