K-2 is an assault rifle in CrossFire.

It becomes the standard service rifle of the Republic of Korea Armed Forces and this weapon fires 5.56x45mm NATO cartridges.

The K-2 has a decent power, good accuracy, and minimal recoil. But this weapon has slower rate of fire than any other assault rifle.

This weapon holds 30 rounds per magazine.

Stats
Add a photo to this gallery 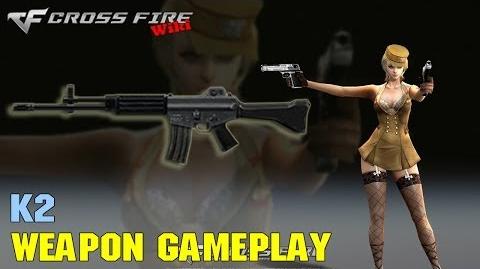 CrossFire - K-2 - Weapon Gameplay
Add a photo to this gallery

Retrieved from "https://crossfirefps.fandom.com/wiki/K-2?oldid=192971"
Community content is available under CC-BY-SA unless otherwise noted.