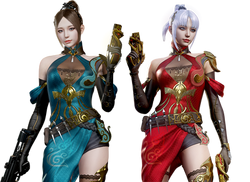 Jin Mao Shu is a female character featured in CrossFire.

This character is inspired by the character with the same name in the Chinese movie Journey to the West. Both sides features the ancient Chinese outfit which fits the background of the said movie.

The character can do a series of arm dancing by pressing N.

GR Side
Add a photo to this gallery

Former Concept
Add a photo to this gallery

Retrieved from "https://crossfirefps.fandom.com/wiki/Jin_Mao_Shu?oldid=202006"
Community content is available under CC-BY-SA unless otherwise noted.