Icy Abyss is a Zombie Mode map that brings soldiers to familiar locations, then having them face off against the Freezing Guardian. It works similarly to Void Rift, but features areas from the following maps: Valkyrie Lab, Broken Station, and Fatal Canyon.

Just like its predecessor, the map has three different sectors before the final sector with the final boss waiting. This time, these three sectors feature layout from maps across all three of the main Zombie Modes, which are Valkyrie Lab's outer square (ZM1), Broken Station's plaza (ZM2), and Fatal Canyon's hoover dam (ZM3).

Soldiers are thrown into the first three sectors at random, meaning they always end up in the plateau to face whichever form of the Freezing Guardian they've summoned. Once in a sector, they must fend themselves off for three minutes for the sector summon portal to appear or wait until the difficulty increases further to their liking. Here are the four sectors:

This outdoors area from Valkyrie Lab features many enemies spawns as they jump out of every sniper nests and others doorways on the ground floor. This sector belongs to Abyss Dr. Haze and her minions: Spitters, Demolishers, Elite Disaster, Tick Queens (and Kamikaze Crawlers), plus void sub-bosses.

This closed off section of Broken Station's plaza features enemies spawning from the side buildings or by dropping off the bridge. This sector is guarded by the Abyss Destroyer and its army of: Crawlers, Ancient Moles, Bloated Kamikaze, Mechanical Crabs and Elite Hammerheads, plus void sub-bosses.

The ARES dam area from Fatal Canyon now allows soldiers to go at the bottom via an access ramp. This sectors is where the Abyss Scorpion resides with its minions: Speedilos, Skull Troopers , Mortar Bots and Magma Demolishers, plus void sub-bosses.

This frozen cliff is where the soldiers will have to face off against the Freezing Guardian. The boss can move from one side to another to keep soldiers on their toes. At some point, the soldiers will get to visit the inside of the beast and be able to attack its heart.

The map uses the same buffs and mutators from Void Rift, but with some notable additions. These includes: four defense buffs, two soul buffs, a new type with ten buffs, three Freezing Guardian buff and finally one new mutator. 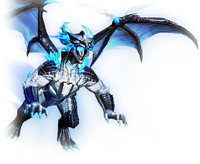