Ghost Vs. Mutants was the fourth installment in the Mutation variations. Soldiers run wild with Ghost equipment attempting to avoid the Mutants trying to pinpoint their locations on an exclusive map available for this mode.

This mode uses Hero Mode X's mechanics and rules, meaning that melees do more damages and rounds might end up in a massive fight after enough soldiers are mutated. However, Havoc is unable to see the specific location of each soldier, so he has to pinpoint with the rest of the Mutants, while Ranger is permanently marked.

As the round starts, everyone has the usual countdown to find a suitable spot to camp and then depending on the number of players present, some will become host mutations. The Ghosts use mixed mechanics as they are only invisible when stationary (Ghost Mode) and they also have loud breath sounds (Shadow Mode's). Also, when Mutants are within Ghosts' breathing distance, a notice will pop up to alert them to look for the Ghosts nearby.

Additionally, a new bar that slowly fills up will give points each time it's full, the twist however is that it fills up much faster if the ghost is moving. Thus meaning that a ghost that likes to take risks will be awarded points much faster than camping allies, although they might get greedy and get mutated instead if careless.

The ghosts can also attempt to attack nearby Mutants for additional points, thanks to the damage bonus given for each mutated soldiers. Therefore most melees are likely to deal with massive damages anywhere on the body, although aiming at their head is always the better option. Mixing that with the meter could end up giving lots of points. 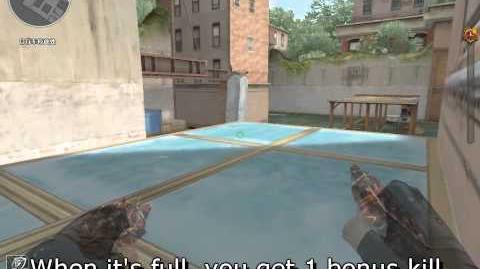