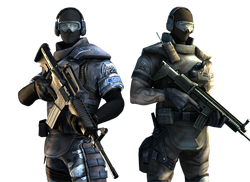 Ghost M is a male character featured in CrossFire.

He shares the same model with Ghost character in Ghost Mode but without the speciality ghost mask and invisibility ability, while his GR counterpart is simply recolored. He also received exclusive HUD models for both GR and BL model.

In most versions, he can be obtained temporary through Chaos/Nightmare Box.

CF Ghost M
Add a photo to this gallery
Retrieved from "https://crossfirefps.fandom.com/wiki/Ghost_M?oldid=195651"
Community content is available under CC-BY-SA unless otherwise noted.