Furious Kick is a special perk available for VVIP Characters (except Ultimatum, Heirs and Sicarios) and Arch-Honorary.

This attack works similarly to the Spin Kick from Zombie Mode maps (notably Devastated City) - pressing E will perform a round-house kick that damages the nearby opponent. Different than Spin Kick (which is performed by characters spinning their leg from left-to-right), the Furious Kick is performed by lifting the leg from right to up-front, suggesting it as a round-house kick rather than a spin kick, thus making Furious Kick an easy weapon to head-shot enemies.

Furious Kick is as powerful as the default Knife's secondary attack, requiring two body kicks to kill or one to the head. Furious Kick can be performed while jumping, but cannot be performed when crouching, bunny-jump, drawing weapon, bolt-cycling sniper rifles, or reloading weapons. 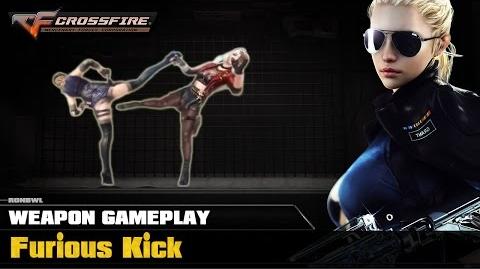